How often do you come across an ad that makes you stop and think to yourself “wow, this ad is so gooood!”

An ad that not only gets upvoted 6,200 times and gets countless Reddit user awards but also generates over 2,600 mostly positive comments. 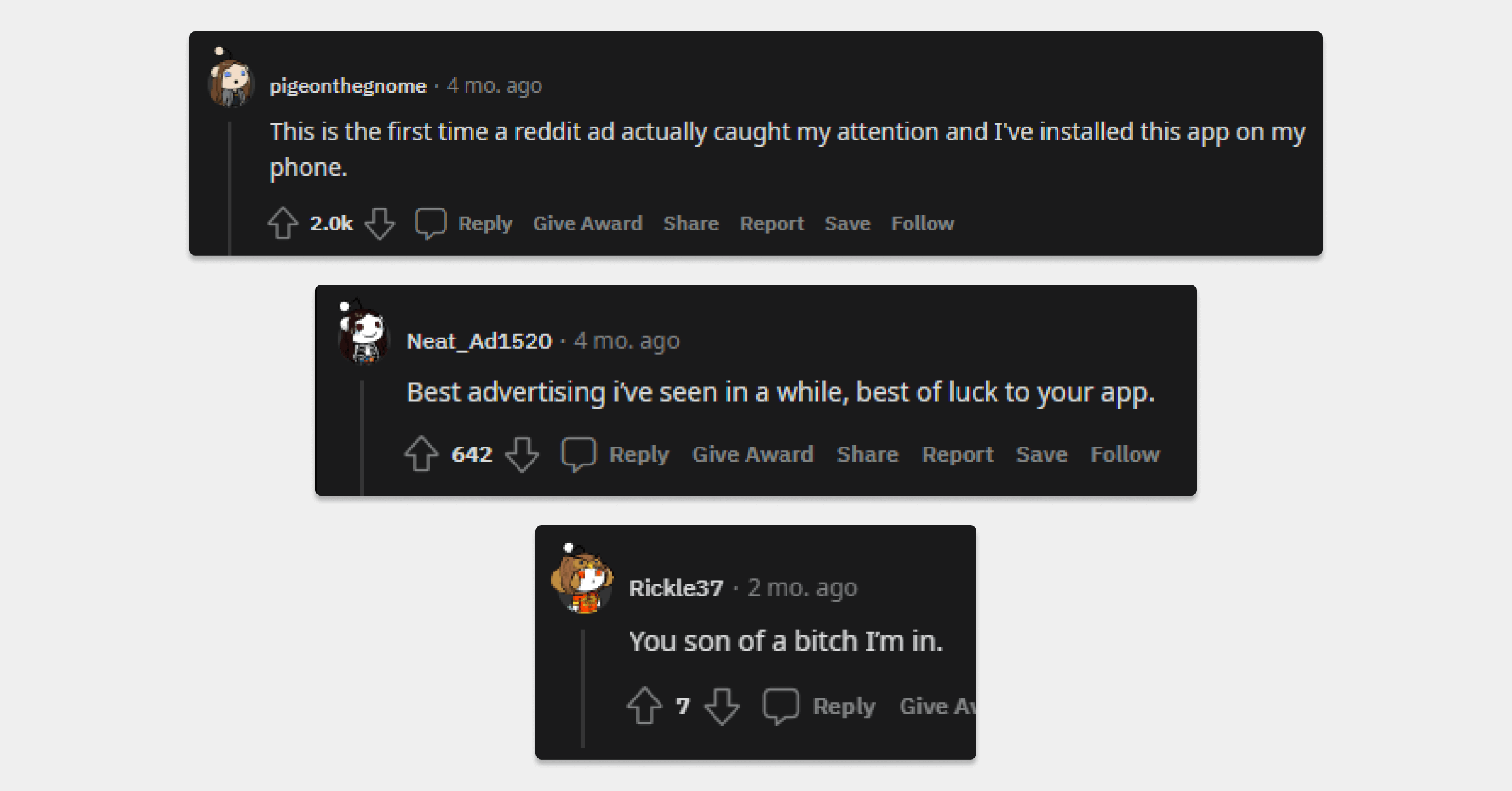 Let’s break down what made it so appealing to Reddit users.

If you compare it with the next ad from your feed, it looks nowhere near the same. 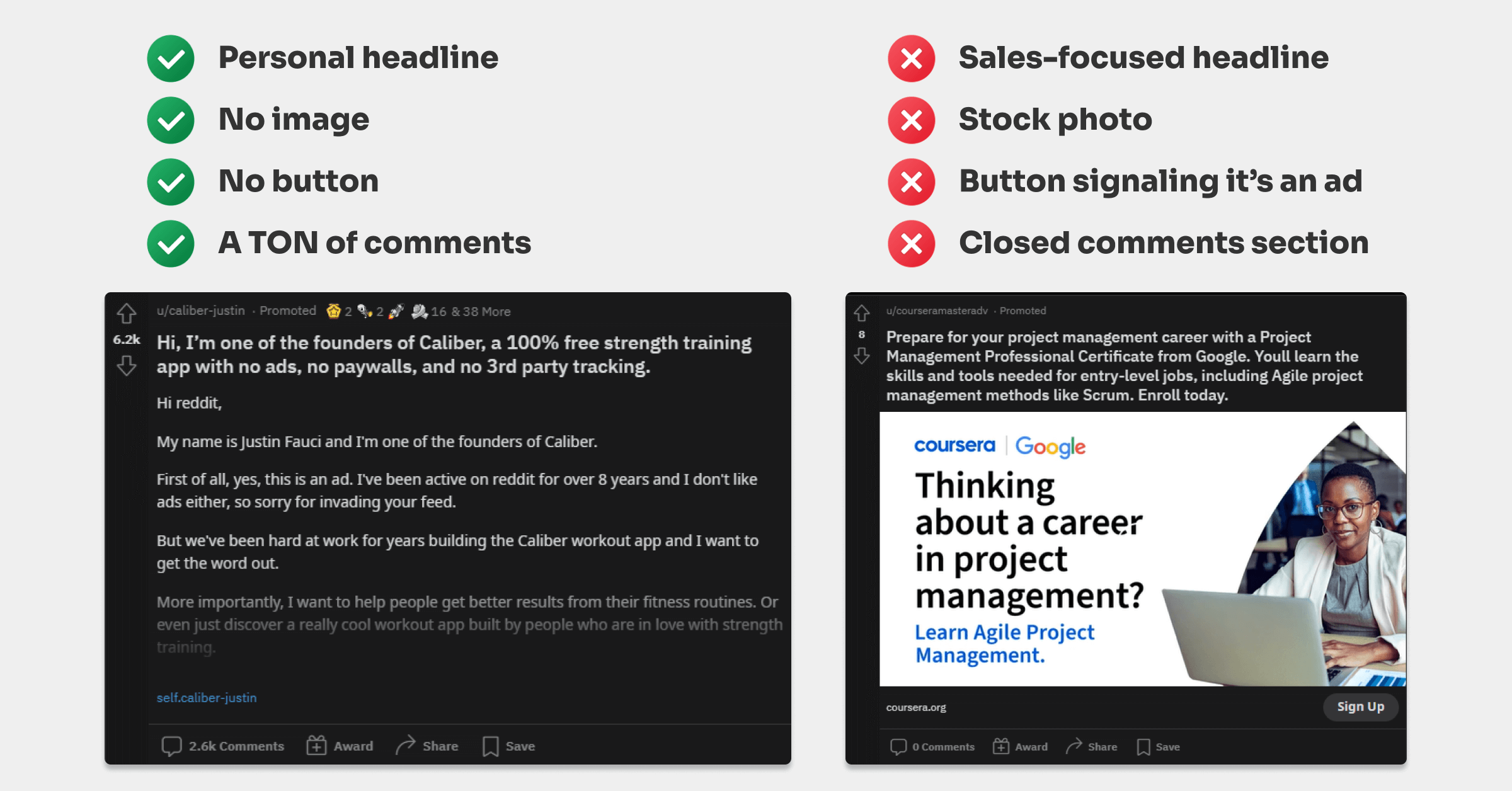 The headline is personal as it comes straight from the co-founder, and catchy thanks to mentioning all the good stuff users appreciate about B2C products (no subscription, ads, paywalls, or 3rd party tracking). 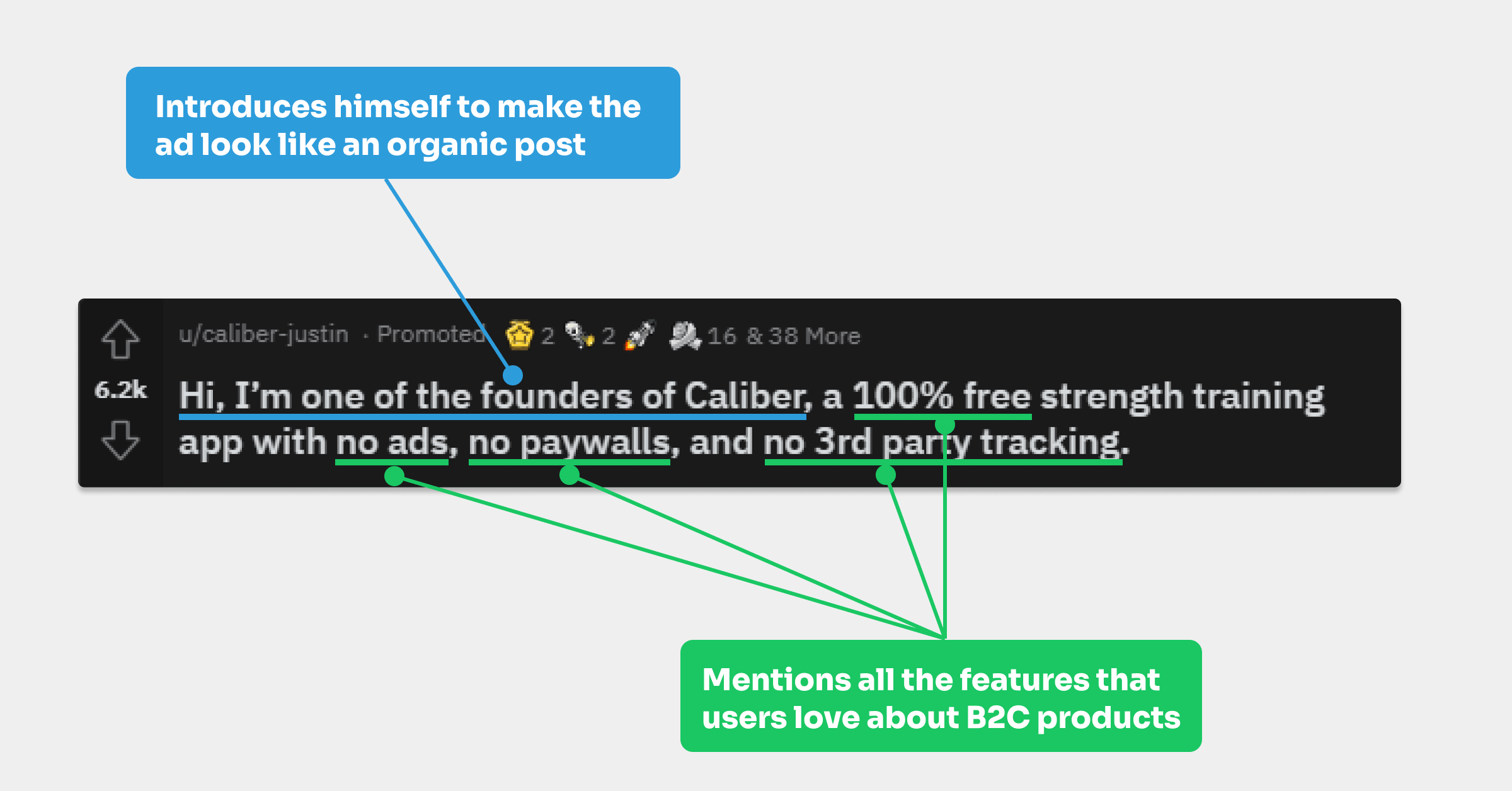 The ad text begins with the Caliber co-founder introducing himself using his real name. There aren’t a lot of ads (or any?) that do it so it helps it stand out even more. 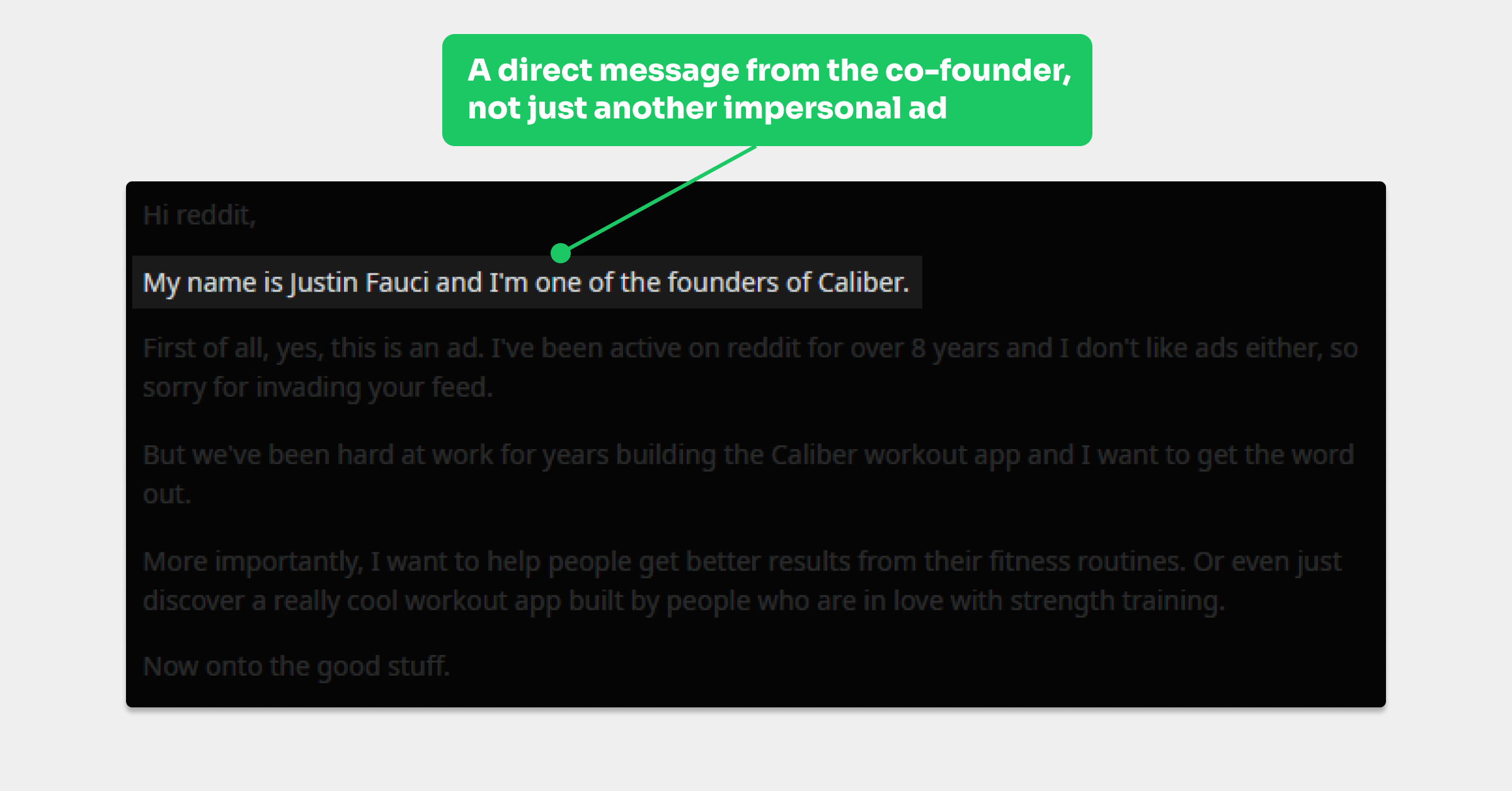 Only in the second line of the ad text, Justin mentions that this post is an ad. And I wouldn’t be surprised if many users realized it only at this point. His confession surely won’t be taken wrong though as users appreciate such transparency.

Then, he goes on and says a very smart thing that helps him gain readers’ further trust.

It’s a clear signal that he’s not some company that’s never used Reddit before and came here just to “invade their feeds.” He’s a long-time user and also not a fan of ads. 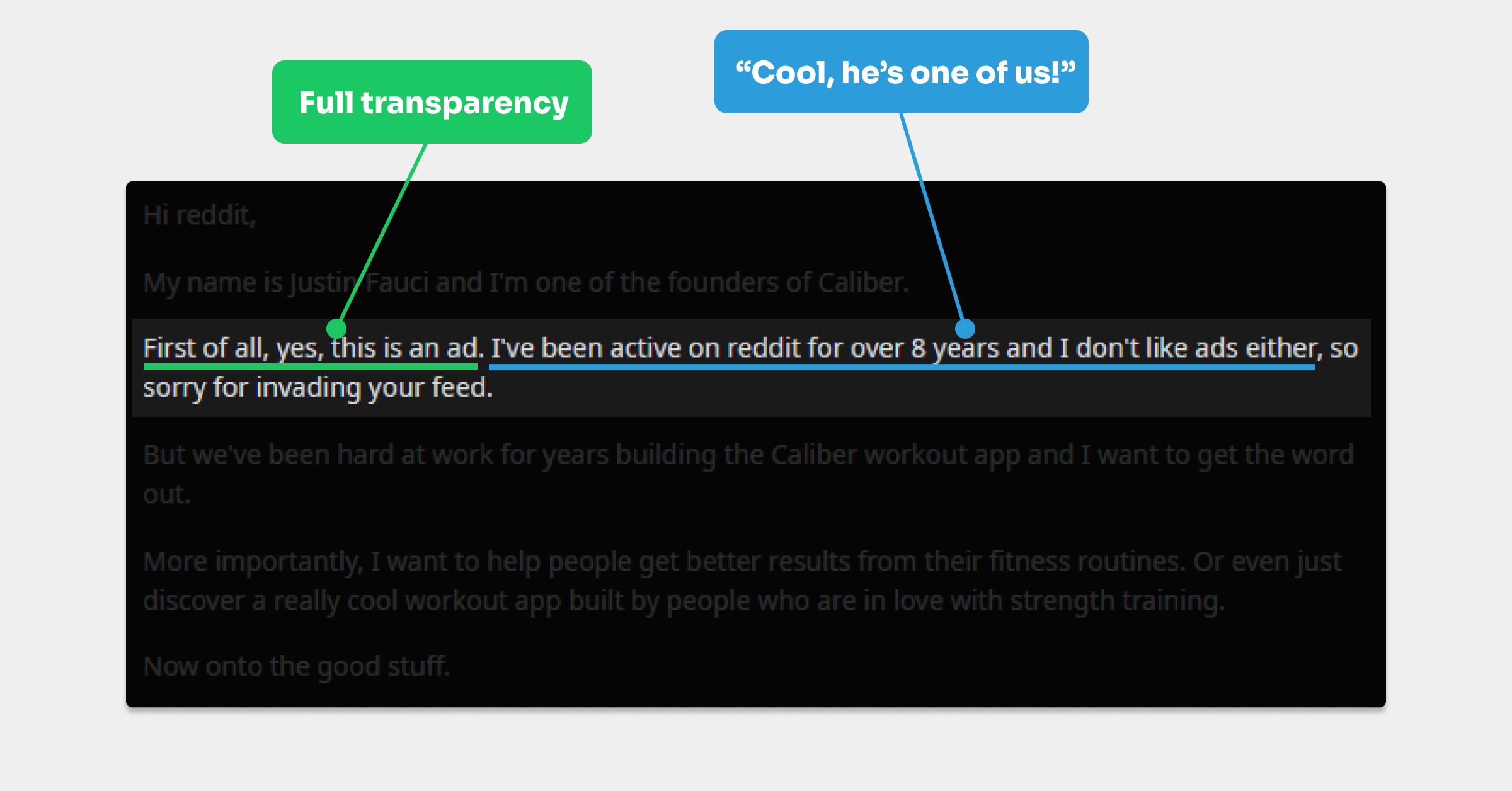 Only after earning users’ trust, he moves on to explain why he’s running this ad.

And while the real reason is that he’s promoting his product, he balances it nicely by giving a second, non-selfish reason so that it doesn’t sound like it’s all about him. 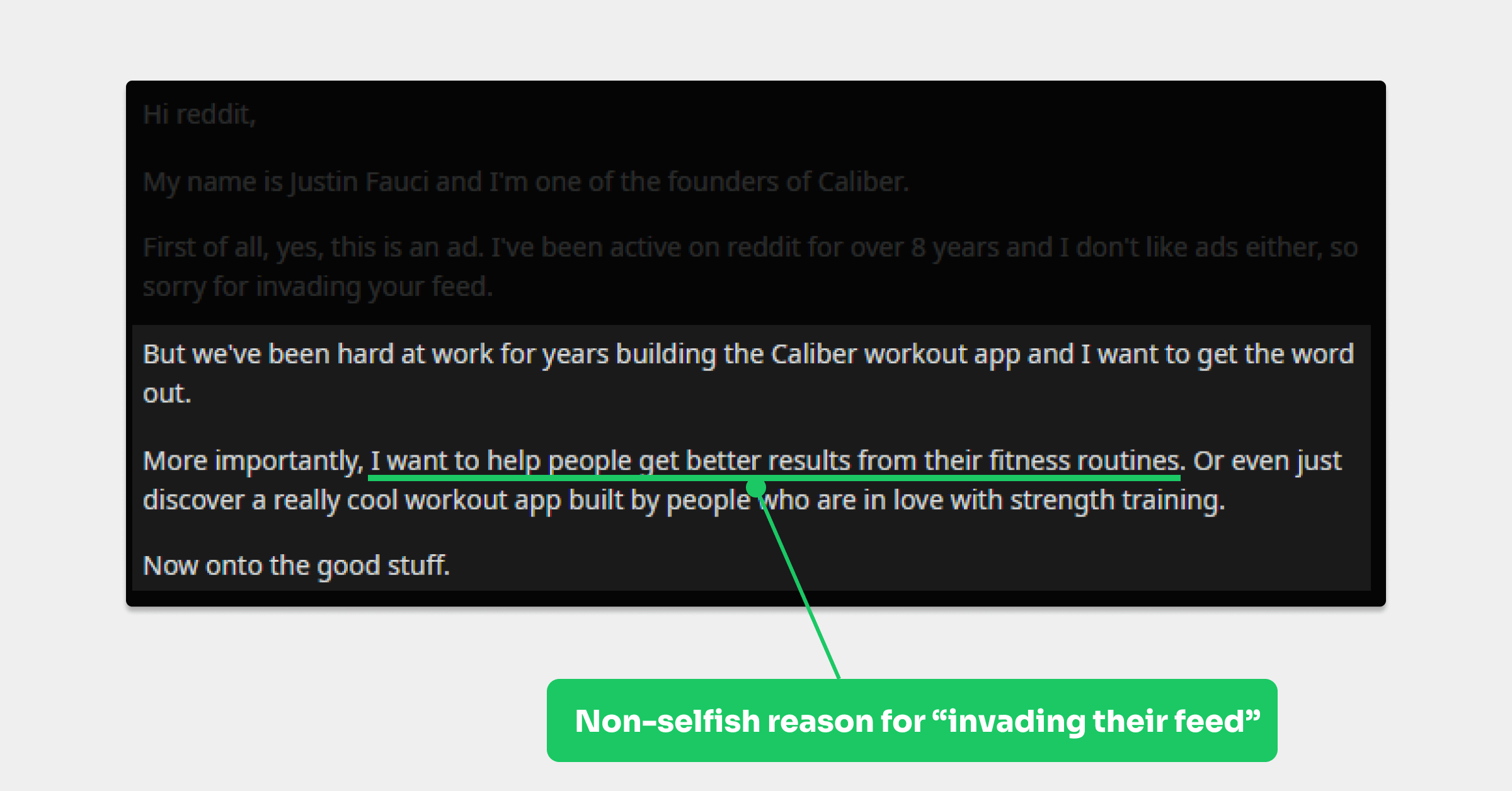 When it’s time to introduce his app, Justin does another smart thing.

He’s aware of the fact that all the good stuff he mentioned (no subscription, ads, and paywalls) may sound too good to be true to some users so to anticipate their questions, he says he’ll touch upon this aspect later in his post. 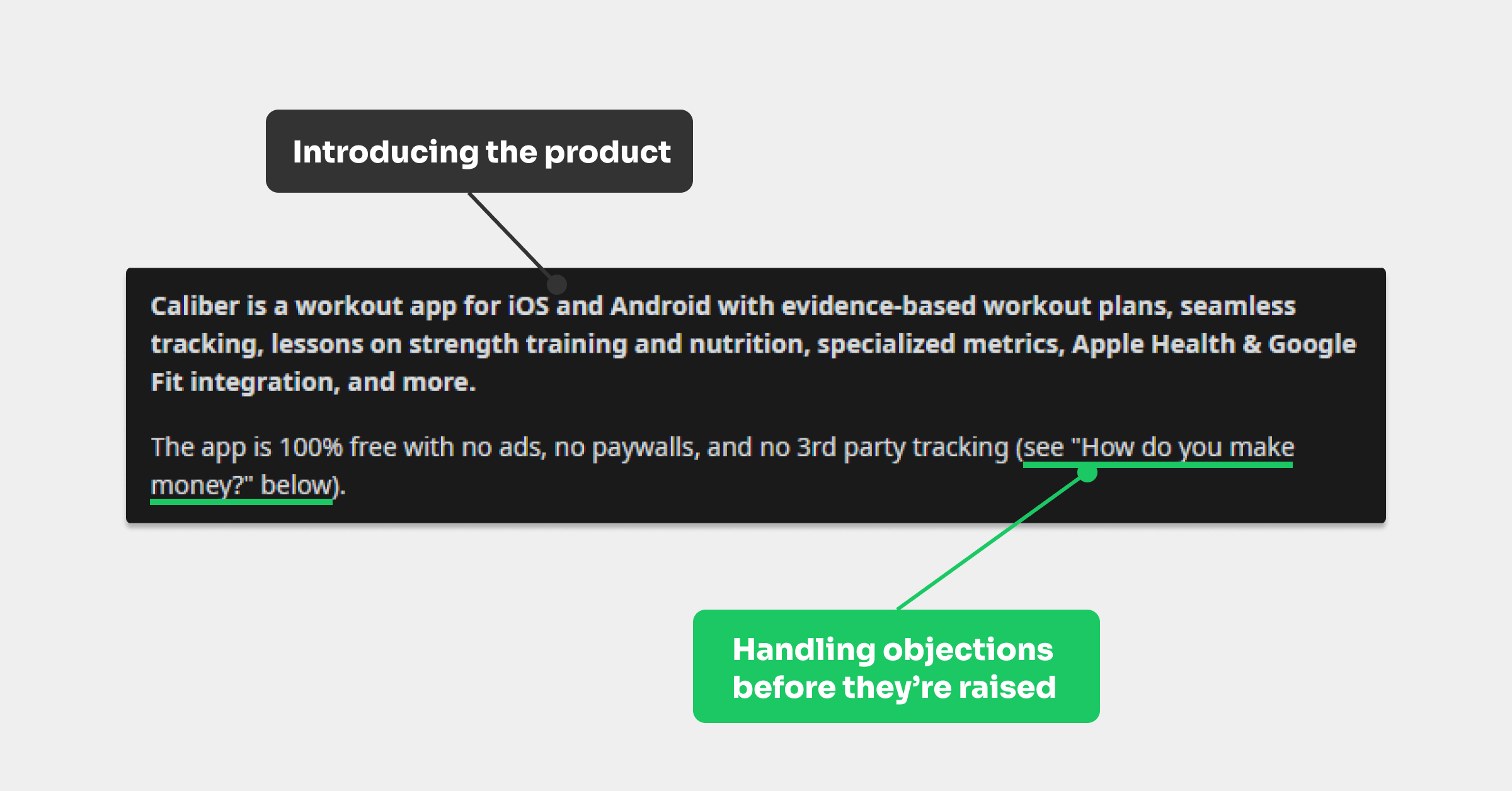 Then, he gives the product pitch and makes it more convincing by subtly mentioning he’s eating his own dog food. 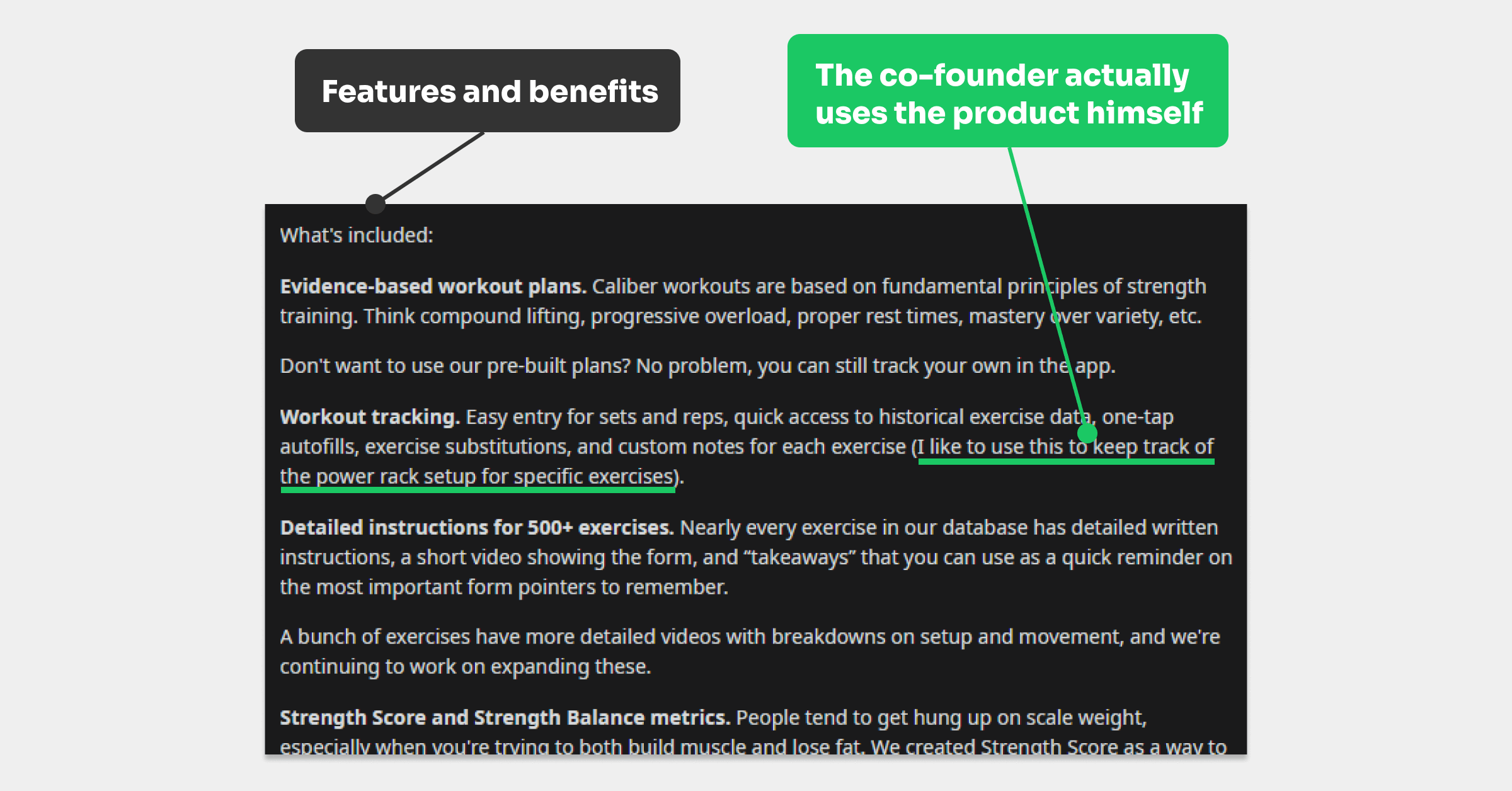 After explaining the product, it’s time for some more transparency.

Justin describes how they’re able to offer the app completely for free and mentions how they make money. Probably no other ad does that so it makes his ad stand out even more.

His explanation is also a nice, subtle pitch of their premium coaching service. 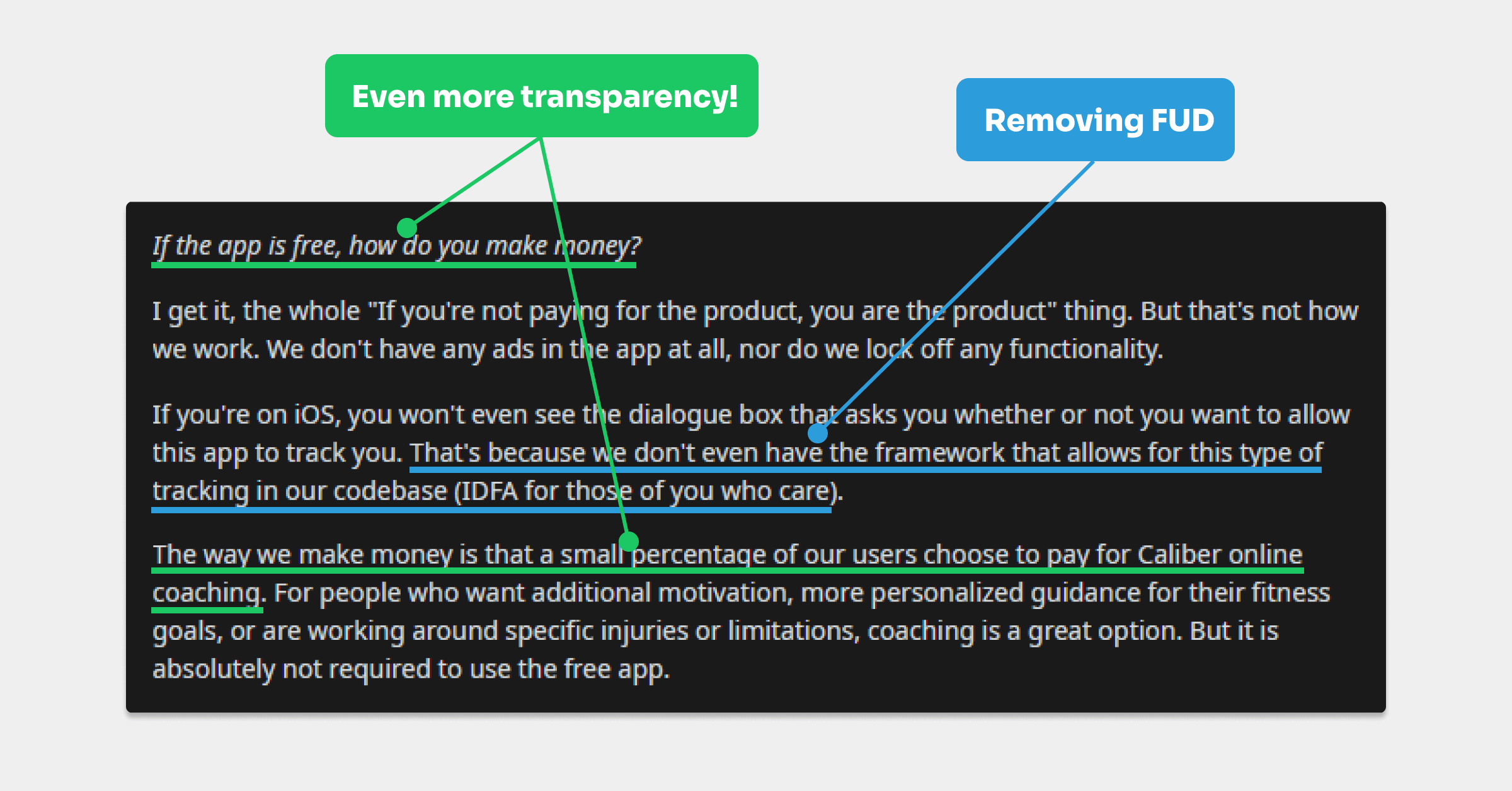 At the end of the post, Justin invites users to either join the Caliber subreddit or download the app.

He offers his help in their community, which is another personal touch that makes him and his brand likeable.

Also, notice the download link is a deep link which leads to a different destination based on users’ device. If you’re using iOS, it goes to the App Store, if Android - to Google Play, and if you’re on desktop, it goes to Caliber’s website. All with a single link. 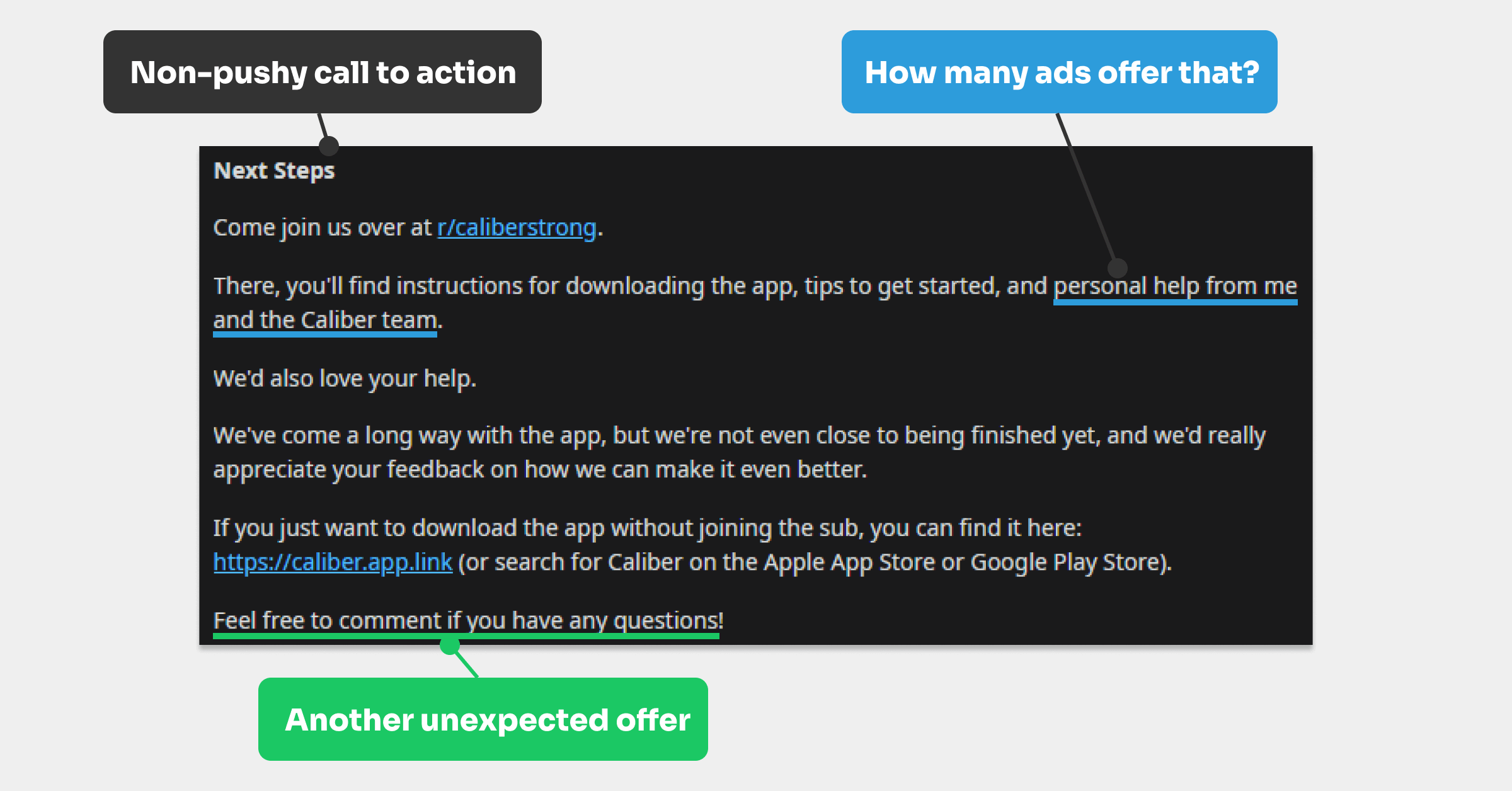 If you thought Justin just launched the ad and called it a day, you’d be so wrong.

He made the most of the comment section too.

On Reddit, the sole fact of allowing comments is greatly appreciated by users as it’s so uncommon for ads. But when the OP agrees that closing comments is against the spirit of Reddit, users have no doubt he’s really a part of the community which gains him even more trust. 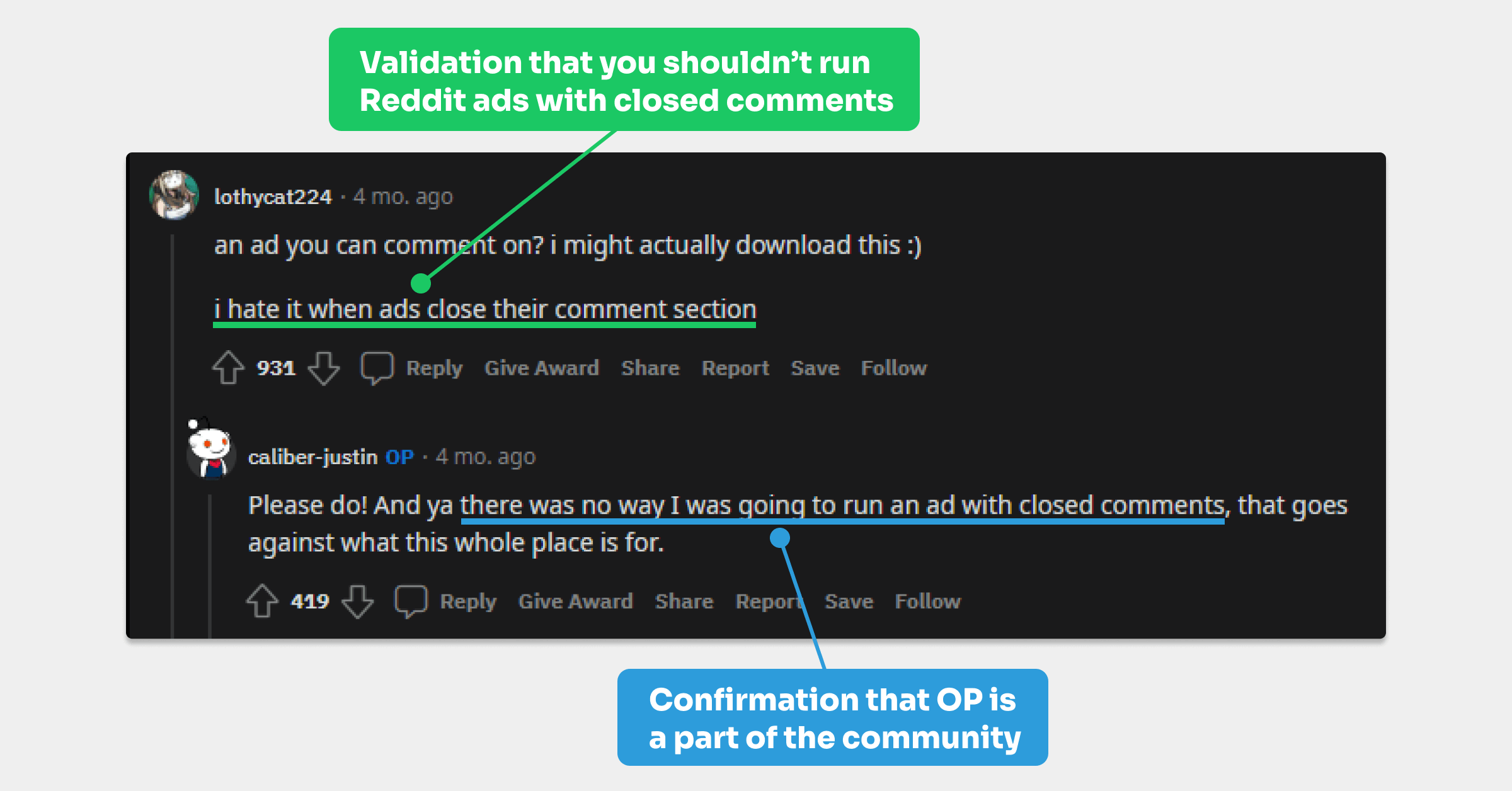 Not only did he reply to most of the comments but also encouraged users to share their feedback, started conversations… 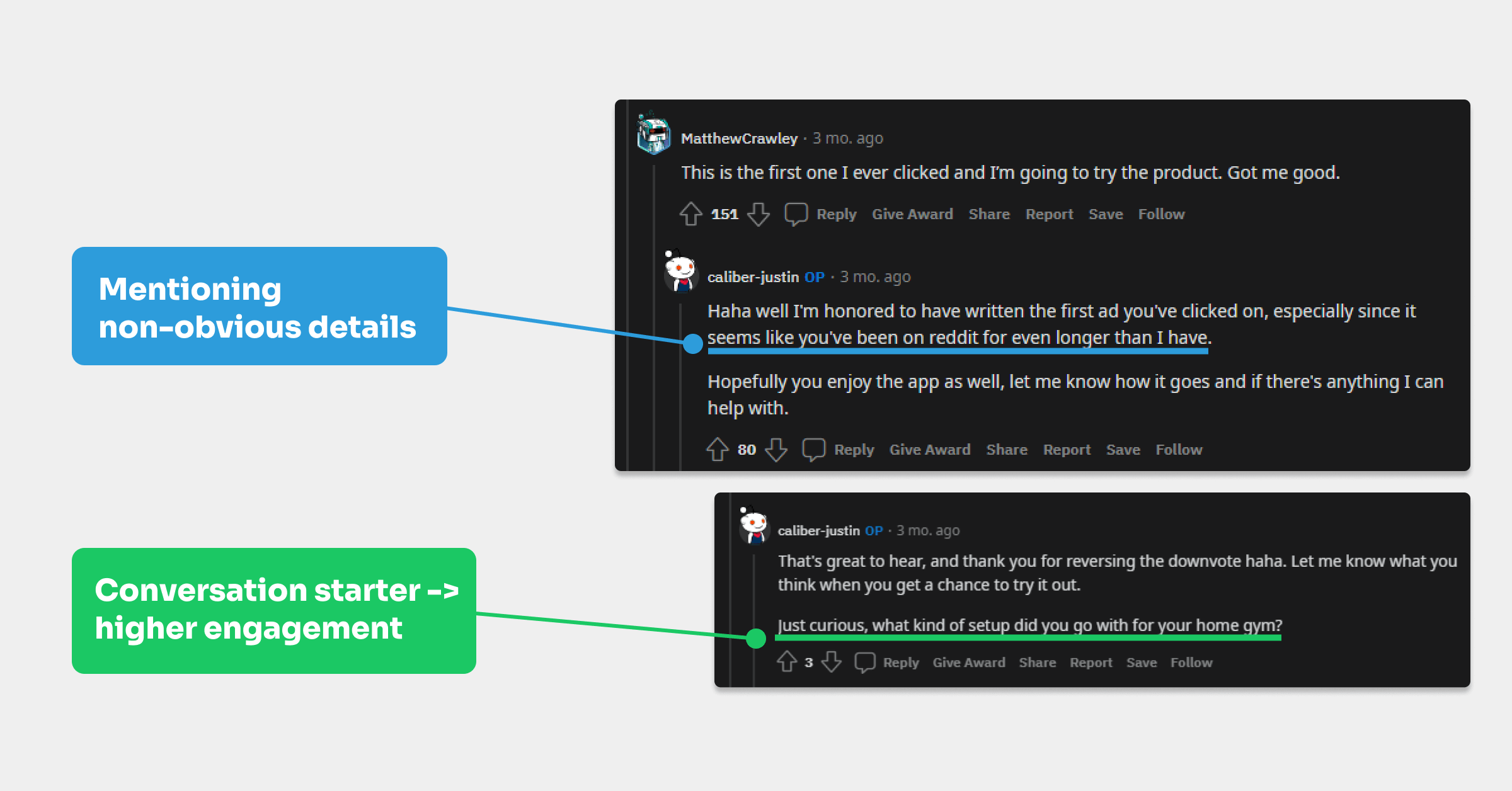 …and really took his time to genuinely help users who needed it most: 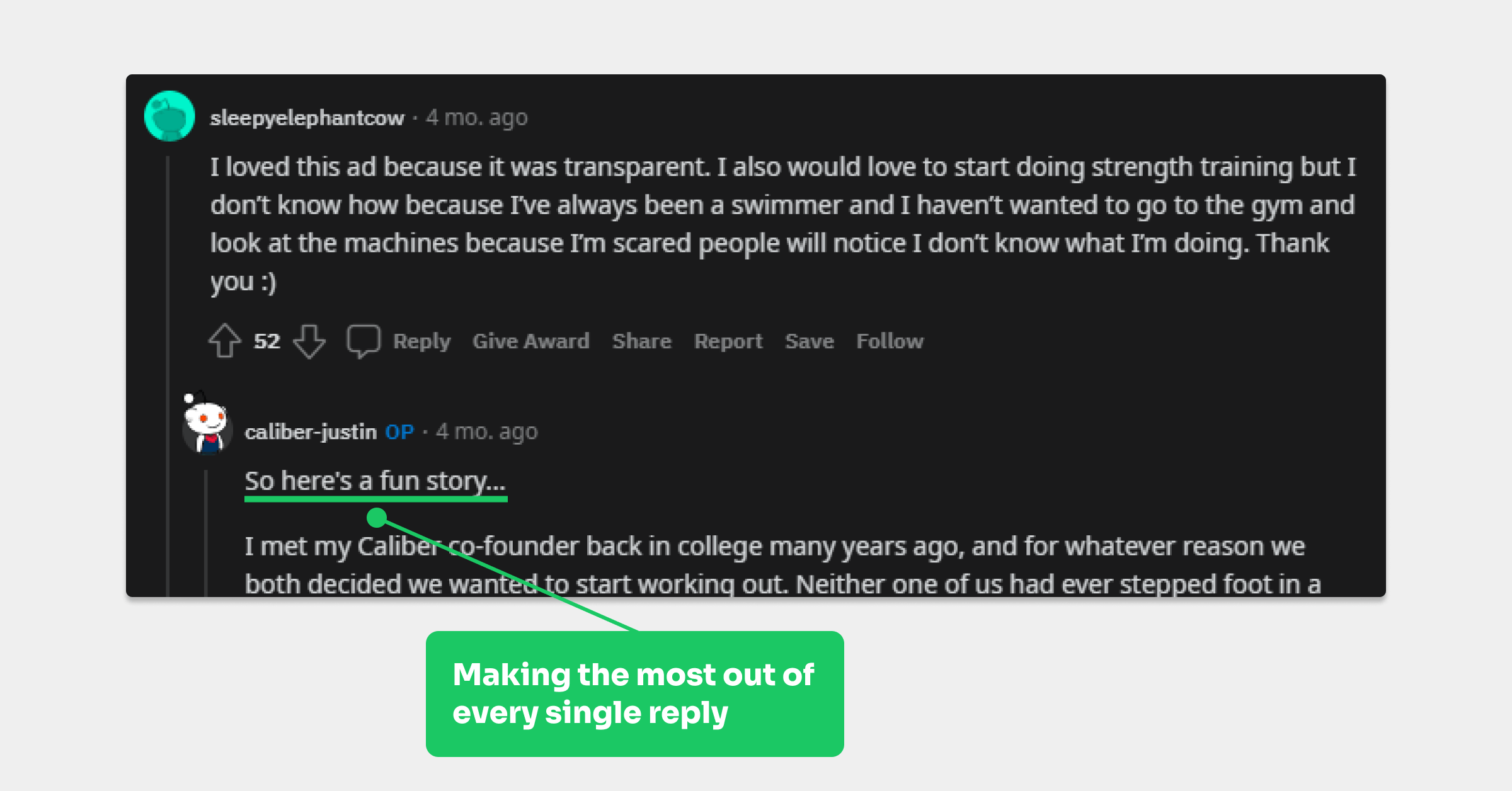 People value honesty, authenticity, and transparency. It makes you (and your brand) likeable, helps build a connection on a personal level, and makes your ads stand out from the rest.

As one of the commenters said, Caliber’s ad feels like “a genuine outreach with an authentic message.”

And that was the key to creating their successful Reddit ad.

The feedback says it all. 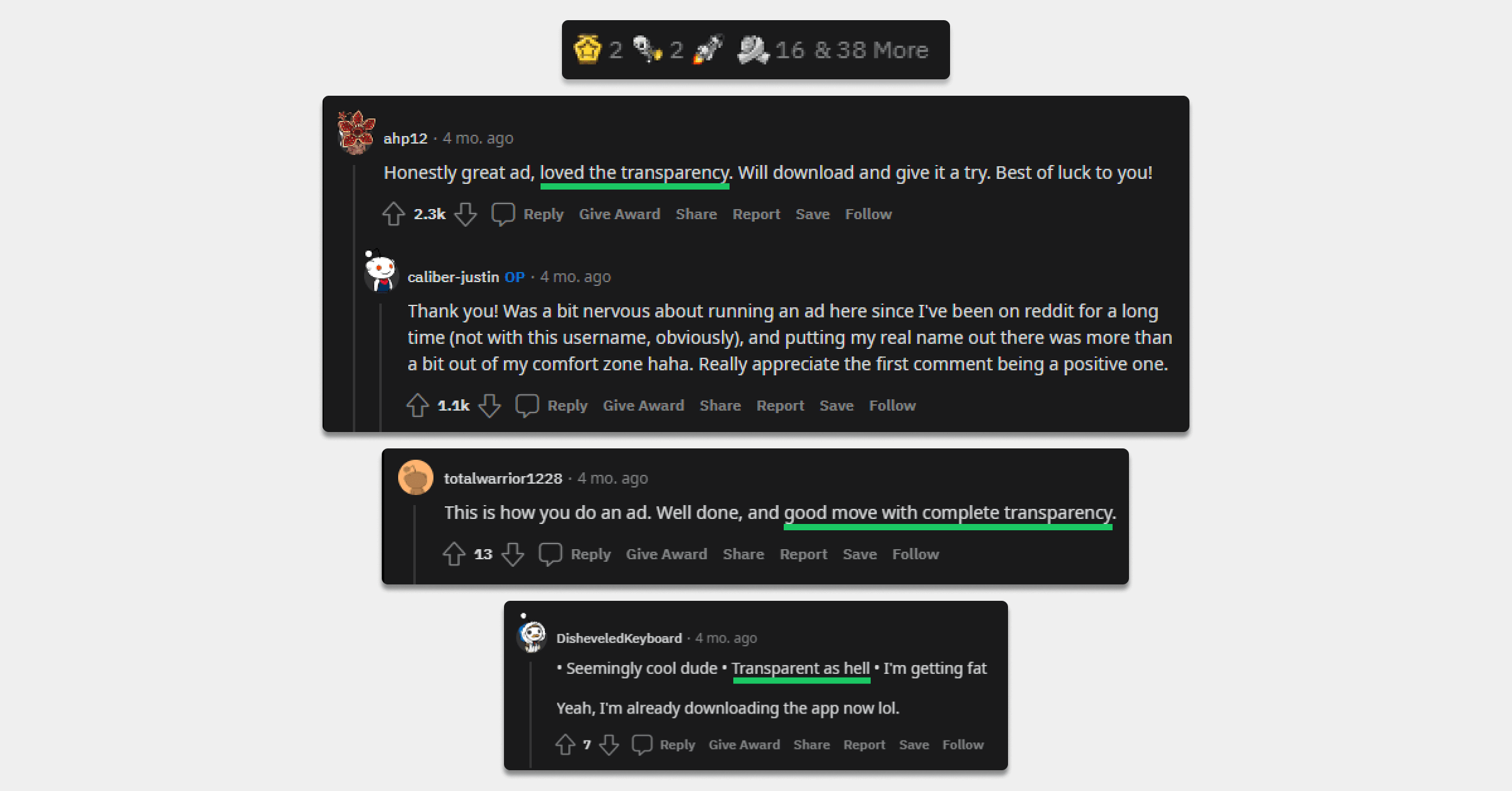